To begin with, I attended the We Are Developers World Congress last year (2017) and I was quite amazed by it. I got to see John Romero, the legend of game development and author of titles such as Wolfenstein 3D, Doom and Quake I. Actually, the congress inspired me so much that I decided to finally part with my scientific career and pursue a life as a software developer and/or system administrator (a bit of both in reality). To the point, though. The We Are Developers World Congress is a fairly novel venture and even the Internet knows very little about it outside of  the main website and single blog posts. It hasn’t become a tradition just yet, thereby media coverage is patchy at best. Considering that it grows exponentially in its grandeur (2000 attendees last year, 8000 registered attendees this year!), I decided to cover it myself.

The Congress started with a treat already – a fireside chat between Monty Munford and Stephen Gary Wozniak (Steve Wozniak, The Great Woz). It was intended as a casual interview, but The Woz proved to be exactly the person as depicted in the 2013 movie with Ashton Kutcher entitled Jobs. Steve Wozniak is extremely chatty and simply adores talking about himself, therefore it was only natural for him to dominate the discussion. Slightly to the detriment of the “chat” aspect of the event. I enjoyed it nevertheless. Many important points were raised – the economy of social media (Should we not get a fair share of the profit made by Facebook and Google off our personal data?), the “I” in “Artificial Intelligence” (It’s not really “intelligence” if it’s programmed!), Elon Musk (Tesla fails to deliver, year after year…), etc. It was somewhat surprising to witness that Steve Wozniak hasn’t really changed since the crazy ventures of his teen years with Steven Paul Jobs. Quite the amazing spirit!

The fireside chat was followed by an interesting talk from Joseph Sirosh from Microsoft. He talked about the various machine learning tools offered as part of Microsoft’s Azure hosting platform. To be honest, I am extremely skeptical regarding Microsoft’s ideas, especially when it concerns open-source software, supposedly open to the public. Microsoft has a disappointing track record of using the embrace, extend, extinguish tactic against promising software projects and a sinusoidal quality trend of its flagship product – Windows. Accordingly, I took the with a bucket of salt approach. The mood among other attendees was similarly negative. Unnecessarily, though! Azure’s machine learning tools seemed very promising in the end. I do consider using them for some of my projects.

After the lunch break I joined the Headless CMS track, and after the initial slightly disappointing talk, I was enthusiastic about Jeremiah Lee and his JSON API idea. REST APIs are a big part of the Web nowadays, ever increasingly so. We do need a slightly more elaborate and efficient data format standard built on-top of the venerable JSON. At that point I realized that unlike the Web development track last year, this time programming language animosities were absent. The implementation is irrelevant to  the standard if we all agree on its importance!  The last talk in the Headless CMS track I attended was given by Kaz Sato from Google. The topic being machine learning again, but this time leveraging Google’s AutoML platform and TensorFlow. Machine learning is actually one of the main themes of this year’s edition of the We Are Developers World Congress. It’s very clear that we need it! 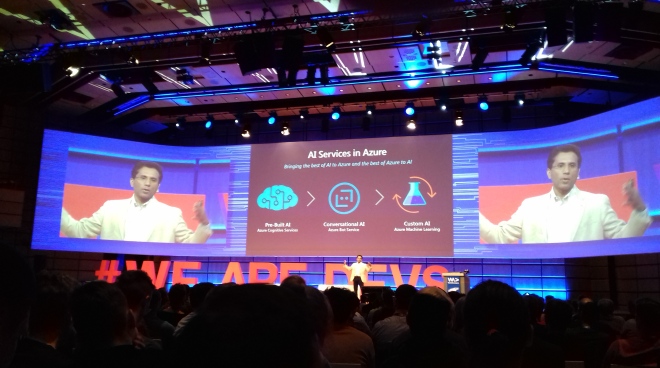 To sum up, based on the various talks I attended, I begin to form a vision regarding the future of computers. We started with humongous, clunky mainframes and progressed into the personal computer era with the contributions from Steve Wozniak, Steve Jobs and many others. However, the dichotomy returns. Computers turn into mobile “enabling” devices, which aid us in our daily tasks and ease our interaction with the world (and each other). Heaps of data at our fingertips! However, we need a back-end, an infrastructure of powerful serves to store data and organize it in an accessible way. In-between is of course a robust network interface which carries the data from the back-end to us, the clients/users.